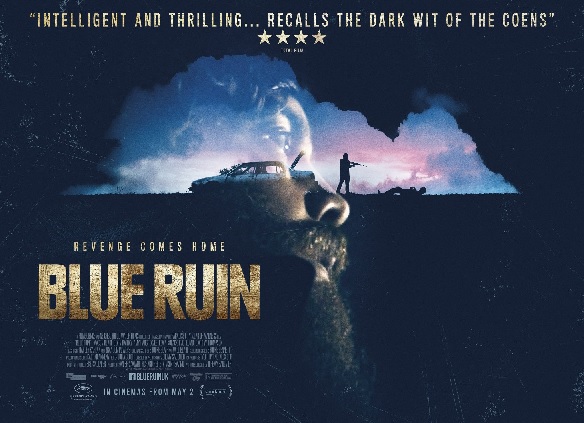 Watching the gripping, blood-soaked and beautifully photographed revenge thriller Blue Ruin, it’s amazing to think it cost only $35,000 to make, and the money was raised via crowd-funding website Kickstarter. With its lean story-telling, restrained acting, visceral violence and forensic attention to detail, the film puts Hollywood’s big buck splurge merchants to shame.

At its heart Blue Ruin is a human story about a haunted man confronting his past and Macon Blair in the lead role is superb.

Director-writer-cinematographer Jeremy Saulnier has kept a tight rein on his creative vision as well as his budget. Before this film Saulnier’s credits were mainly on the photographic side, so Blue Ruin has a visual lustre to it: the Virginian countryside, diners, darkened houses and a garden fork resting against the wall all look great up on the big screen. Saulnier’s screenplay is, he says, ‘a deeply personal exploration of parental mortality and the emotional toll it takes on surviving family members’. It is not bleak, however. At the end the film offers hope for a better future, the possibility of an end to ‘blood-for-blood’.

The film tells the story of Dwight, a straggly-bearded vagrant who lives in his rusty old Pontiac, living from hand to mouth and taking baths when open windows allow. One morning he is woken by a friendly policewoman, who asks him to come down to the station. There he learns that the man convicted of murdering his parents is about to be released from prison. Dwight immediately drives to his childhood home in Virginia to carry out an act of vengeance, which leads to a brutal fight to protect his estranged family.

The violence portrayed in Blue Ruin is often graphic. In one scene which had the audience squirming, Dwight tries unsuccessfully to remove a crossbow arrow from his thigh. Not a film for the squeamish, it makes Rambo look like Bambi. But the gore is not glorified – it shows the vicious circle of revenge and how it achieves nothing except tragedy.

Dwight’s sad brown eyes eloquently express the depth of his loss. ‘I’m not used to talking this much,’ he tells his sister, as they share a few minutes of calm before the storm. By now he has cut his hair and shaved off his beard so that she scarcely recognises him. Dressed in preppy clothes, he looks ‘square’, as his roadie friend Ben (Devin Ratray) points out. But as events start to unravel, the eagle eyed in the audience will notice that first one, then the second, button of his collar come undone. This attention to detail is one of the things that makes the film special.

In his pitch for funding on Kickstarter Saulnier describes his film as ‘like plucking a character from a Hal Ashby film and tossing them into No Country for Old Men.’ Ashby directed several acclaimed films in the 70s, such as Harold and Maude, many about outsiders. He would have rooted for Dwight, who has already been thrown by fate into one desperate world, and now chooses to enter another. He’s not very good at shooting and fighting. The resulting black comedy takes the film into Coen Brothers territory, after its quiet and serious start. But its dialogue is leaner and less gleeful, like its main character. As Ben advises Dwight: ‘No speeches. Just talking. You point the gun. You shoot the gun.’ At a chemist, an ashen-faced Dwight buys supplies for his wound. He thinks about trying to explain his predicament to the cashier, then gives up: ‘I just … yup.’