In Calvary a priest is told during confession: ‘I’m going to kill you, Father.’ This would be in revenge for years of childhood sexual abuse suffered at the hands of another priest (now dead). ‘A week on Sunday,’ the priest is told. ‘On the beach.’ He knows the identity of the man, but we do not, and for the rest of the film we meet an assortment of would-be murderers, as Father James Lavelle (Brendan Gleeson) tries to avert disaster.

From the film’s startling opening line to its powerful wordless finale, we are taken on a journey to the dark night of the soul. What starts off as a ‘who will do it?’ becomes a sort of Irish black comedy existential Western, with priest as sheriff, fighting for goodness in a world threatened by evil, greed, cynicism, hate and perversion. Like Gary Cooper in High Noon, Father James knows a reckoning is coming and he looks to be badly outnumbered by baddies in his fight to save his parish, himself and his faith. 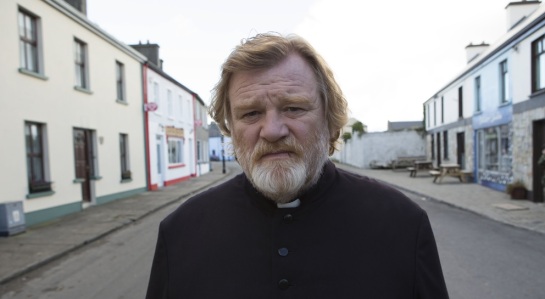 As Father James, Brendan Gleeson gives a towering performance. Humanity shines out of his wise grey-bearded face as he confronts a battalion of troubles. He is no saint, but he is Christ-like in his compassion and understanding. He tells his daughter, ‘I think there’s too much talk about sin and not enough about virtue. Forgiveness is highly underrated.’

Writer-director John Michael McDonagh has used the same County Sligo location and many of the same actors who featured in his previous critically-acclaimed film, The Guard. Both films have witty scripts, peppered with memorable one-liners. Chris O’Dowd’s butcher says of his adulterous wife, ‘she’s bi-polar or lactose intolerant – one of the two.’ Dylan Moran’s obnoxious banker wants to make amends because ‘I feel like I ought to feel guilty.’ But the two films differ in their seriousness of purpose. There are laughs to be had in Calvary, but the laughter is more Samuel Beckett than Father Ted. One look at Gleeson’s suffering face soon shuts us up. ‘You can find beauty in most things,’ he says, ‘but not everything.’ The same can be said of humour.

The characters lining up on the dark side include Aidan Gillen, who usually plays nasty pieces of work: his cynical coke-sniffing doctor is another to add to his collection. The local barman taunts Father James (‘you sure there’s a God? Your time has come but you don’t even realise’) and beats him with a baseball bat. A Guyanese mechanic (‘they like to be hit, Irish women’) flicks a cigarette butt at him. There’s a reptilian rentboy who talks like a demonic New York gangster (‘Hell’s bells, Mama!’). The banker urinates on his own priceless painting to prove how much he doesn’t care. Then there’s the paedophile serial killer who Father James visits in prison.

However, there are also those who stop him from sinking into despair, or running away to Dublin. Father James’s daughter comes to stay after a failed suicide attempt and they are reconciled. His altar boy is a scallywag and a talented landscape painter. An American writer (M Emmet Walsh) who still uses a typewriter calls him by his Christian name. Father James administers the last rites to an accident victim and later meets his widow once again at the airport, as he attempts to flee. ‘Sometimes I think I can’t go on,’ she says, ‘but I will go on.’ This line, an echo from Waiting for Godot, persuades the priest to return to his parish and face the music.

Ultimately, there is hope. But it’s a close run thing.