This was my first Cambridge Folk Festival and it was love at first sight. Wandering into the grounds of Cherry Hinton Hall on Thursday evening was like entering a friendly Twilight Zone, an alternative reality full of good vibes, where the normal rules don’t apply. CFF is a like a holiday camp for 14,000 folk fans, with its beer tents, deckchairs, Morris dancers, smorgasbord of food vans and bazaar of stalls selling everything from holidays in North Carolina to Hobbit hats made of hemp.

And then there’s the music – at any one time you can choose between acts on two main stages, as well as the Club Tent, the Den and the Hub. Or you can just wander around and stumble upon impromptu jams or beery harmonising. 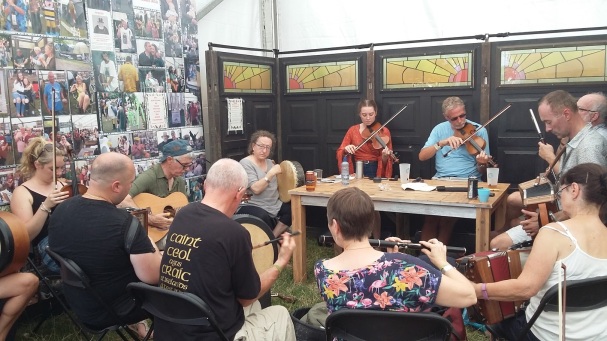 My own musical highlights of the weekend were many and varied: Patti Smith, Songhoy Blues, National Youth Folk Ensemble, Rhiannon Giddens, Peter Buckley Hill and Pünk Flöyd. But each Festival-goer will have their own hitlist. You can’t see everything, and I found myself sampling a couple of songs in one tent, then moving on. In this way I got the flavour of Rosanne Cash (polished), First Aid Kit (anaemic) and Eliza Carthy & Dave Delarre (earthy).

Thursday evening is traditionally when folkies ease themselves back into the Festival spirit, catching up with old friends and perhaps taking in a bit of circus entertainment: a fat man in a black waistcoat and a wiry man in an Edwardian swimsuit draw a large crowd on the grass with their ambitious juggling and escapology act.

After performing a comic striptease, the fat man asks, “Who thinks I can drink this pint of beer while juggling these machetes, while my friend escapes from his straitjacket and chains?” (cheers).

“And who doesn’t really care?” (cheers and laughter).

To their bemusement a little girl wanders over, casually picks up one of their juggling batons then carries it off as though it’s her lost teddy.

More English eccentricity was on show in the Club Tent. Festival veteran Peter Buckley Hill has appeared here since 1980, but his surreal wordplay and smutty ditties were new to me.  He strums his guitar and sings daft, tongue-twisting songs about birds (Torn Between Two Plovers), sheds (‘Edward Woodward’s got good wood in his shed / But the shed itself is shite’) and Hitler’s sex life (see Adolf and Eva: ‘when he was blasting London with his Blitz / His V1 would be exploding on her tits’).

Buckley Hill hinted that this might be his last performance, that he would be going back to his ‘pipe and slippers’. The audience protested. ‘Smoking crack and spanking rent boys,’ he added, for clarification.

I bump into old friend Myke Clifford, who has been compere at CFF for many years.  He is most looking forward to seeing Patti Smith, whom he guesses will want no introduction from him. Myke and photographer Claire Borley share anecdotes about ‘difficult’ previous performers, such as Van Morrison and Mike Scott of the Waterboys, who, newly teetotal, refused to go on stage with the Festival’s Greene King sponsorship banner displaying.

No such diva-like behaviour was evident from Friday’s opening act on the main stage. The National Youth Folk Ensemble were a joy, a hugely talented bunch of musicians between the ages of 14 and 18. When they warmed to the occasion, these kids really shone and their happiness at being there was infectious. ‘This is a hornpipe called Grannies,’ says a young fiddler, ‘going out to all the grannies.’ When the young players meshed together, speeding up to a crescendo, it was intoxicating stuff. After the loud applause at the end of their slot compere Myke declared that ‘the future’s safe’.

Further evidence of this was provided over on Stage 2 by the young women in Kinnaris Quintet, whose soaring (and sawing) Scottish fiddle music was full of passion, tinged with yearning and sadness.

In the Flower Garden folk elder Peggy Seeger shared stories with Festival curator and headliner Rhiannon Giddens about overcoming prejudice through music, and the importance of humour in breaking down barriers. After performing an ‘impeach’ song aimed at George Bush, Seeger confronted a ‘John Cleese lookalike’ Republican in the audience who had been scowling at her. ‘No, I didn’t like the song’, he told her, ‘but it has a damn fine chorus.’

From Mali came Songhoy Blues, purveyors of a hypnotic jitterbug hybrid of musical styles, including rock, blues and reggae. Frontman Aliou Toure defied the stupor-inducing heat with his onstage energy and got us clapping and waving our arms. ‘Music is the best religion’, he said, because it brings everyone together, no matter what beliefs they might have. Songhoy Blues’ exuberance, rhythmic tightness and ‘Summer Breeze’ fuzz guitar went down a storm.

Another crowd favourite was Patti Smith, headlining on Saturday evening, who gave a frequently astonishing, glorious and bonkers performance. At the start she seemed a bit out of sorts, complaining of a hand injury, and telling the organisers to turn off the onstage dry ice machines because ‘we’re not fucking Metallica’.

Keen for her rock and roll band to cross over to folk fans in the audience, Patti talked about growing up in the ‘50s listening to jazz and folk. She thanked Britain for its old ballads and broadsides that ended up in the Appalachian Mountains, then donned her reading glasses for a rousing rendition of Bob Dylan’s A Hard Rain’s a-Gonna Fall. It was Barack Obama’s birthday, she noted wistfully, looking back from our dark political present to a ‘golden age’. The ‘T’ word was left unspoken over the weekend, but there was a lot of quiet anger around, with  performers such as Rhiannon Giddens speaking up for oppressed immigrants.

Always keen to soak up the culture of whichever city she finds herself in, Patti Smith told us that she had visited King’s College Chapel in the morning. Inspired by a painting of the Magi, she performed a newly-improvised poem backed by her band. This led to a surreal version of the Christmas carol We Three Kings, which sounded strangely wonderful in the summer heat.

But Patti left the best until last, with a spellbinding and cathartic Gloria. At her best Smith transcends ‘performance’ and becomes a shaman, like fellow American singer/poet Jim Morrison before her, channelling primal energies with gathering intensity. She takes her band and audience with her on a musical and poetic journey into an altered state. The best music can do this, no matter what we call it, folk, rock ‘n’ roll or classical.

Sunday’s highlight, and a fitting way to end a festival staged near Syd Barrett’s old home, were Sweden’s Pünk Flöyd, who are not punk at all. Rather, they winningly translate the songs of Cambridge’s finest, Pink Floyd, into 3/4 time. The Wallbecomes The Waltz. They signed off with a moving version of Wish You Were Here, which had the crowd bellowing along, and demanding an encore.

The grass was greener

The light was brighter

The nights of wonder