Irene Nemirovsky (1903-1942), Jewish novelist, was born in Kiev, daughter of Leon Nemirovsky, one of the richest bankers in Russia.  During the First World War her family lived a life of luxury in Saint Petersburg, although Irene, an only child, was solitary and lonely, entrusted to the care of a French governess.  According to Myriam Anissimov, her mother (who liked to be called Fanny) ‘felt a kind of aversion’ to her daughter, who developed a ‘ferocious hatred’ for her in return (Preface to Suite Francaise, 2004).  Fanny seems to have been monstrously vain and selfish, seeing Irene as an unwanted reminder of her own declining youth and beauty.  At the end of the Second World War, when Nemirovsky’s children sought help at their grandmother’s Parisian house, she refused to let them in, ‘shouting through the closed door that if their parents were dead they should go to an orphanage’ (Annisimov, 2004). 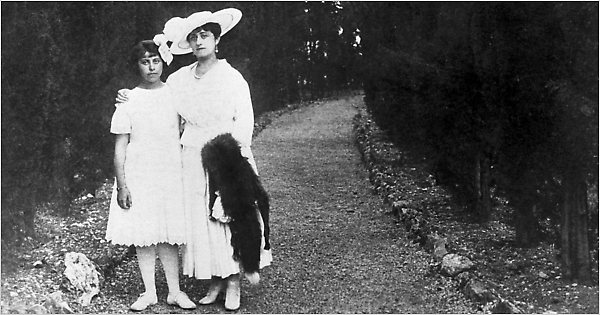 Irene found refuge in books and, influenced by her favourite Russian authors, Turgenev and Tolstoy, started writing at the age of fourteen.  After the Russian Revolution the family fled to Finland, then Stockholm, before sailing to Paris in a small cargo boat in 1919.  The ten-day journey, through a terrible storm, would later inspire the final scene in Nemirovsky’s first novel, David Golder (1929).

In Paris Leon Nemirovsky took over as director of a branch of his own bank and managed to rebuild his fortune.  His family assimilated quickly into French society and Irene enjoyed a privileged emigre life of balls, banquets and beaux between Paris, Biarritz and the Cote d’Azur.  She enrolled at the Sorbonne, graduating with a distinction in literature, and began sending short stories to magazines such as GringoIrene and La Revue de Paris.  In 1926 she published a novella, Le Malentendu, and three years later her novel David Golder became a bestseller, making Irene a minor celebrity.  By 1930, when Le Bal was published, Nemirovsky was a hugely popular and critically-acclaimed writer.  Now married to Michel (Mikhail) Epstein — a Russian emigre banker like her father — she wrote a further eight novels before the outbreak of the Second World War.

When the Germans occupied Paris in June 1940, the Epsteins moved to Issy-l’Eveue, a village in Saone-et-Loire, where their children, Denise and Elisabeth, had already been taken by the family’s nanny.  A French law was passed giving Jews inferior legal and social standing.  Irene and her husband were both foreign and Jewish: the baptism certificates they had obtained by converting to Catholicism in 1939 were useless.  They were forced to wear the Jewish star of David sewn into their clothes.  Although Jews could no longer be published, Nemirovsky continued to write every day.  Her publisher Albin Michel and Horace de Carbuccia of GringoIrene agreed to help her publish her short stories under various pseudonyms, such as Pierre Nerey.  She also wrote a life of Chekhov (La Vie de Tchekhov, 1946) and a novel, Les Feux de l’automne (not published until 1957) and in 1941 started work on what would be her masterpiece, Suite Francaise.

On July 13, 1942, Irene Nemirovsky was arrested for being a ‘stateless person of Jewish descent’.  She was interned at Pithiviers, a French concentration camp, then transported to Auschwitz, where she died, officially of typhus, on August 17.  She was 39.  Her husband was also killed there several months later.  Before Irene was taken from her two children, she entrusted Denise (13) with a suitcase which contained family photographs, diaries and a thick leather binder.  For the rest of the war Denise guarded the suitcase preciously, as she and her five-year old sister Elisabeth were hunted across France by the Germans and the French military police.  It wasn’t until 30 years later that Denise eventually opened it, discovering that the binder contained not the intimate diary she had been wary of reading, but instead a manuscript of two novels of a planned five-volume epic.  Suite Francaise was the story of life under occupation, described almost as it unfolded.  It took Denise Epstein nearly two decades to decipher and transcribe the miniscule handwriting – ‘paper and ink were very scarce. So she wrote the novel on very thin paper, almost like onion skins, in a very small hand.  Words were little more than a millimetre high’ [Denise Epstein, quoted in The Guardian, March 9, 2006].  The book was eventually published in France in 2004 to wide acclaim, hailed by critics as a major literary discovery, the ‘definitive novel’ of France during the Second World War, and compared to the works of Tolstoy and Dostoevsky.

The first volume, Tempete en Juin (Storm in June), tells the story of the panicked exodus from Paris as the Germans advance in 1940: ‘Cars filled all the roads. People jammed together, like fish caught in a net.’  The desperate and starving refugees mostly act selfishly, sometimes murderously.  Nemirovsky paints a picture of a people at each other’s throats, heaping ‘layer upon layer of hatred’ upon each other (The Guardian, March 9, 2006).  But there are acts of quiet heroism, embodied in the behaviour of Maurice and Jeanne Michaud, based (according to Epstein) on people with the same name that Nemirovsky knew.

The second volume, Dolce, is set in Bussy, a small village in occupied France, where a young French wife, whose husband is a prisoner of war, falls in love with the sensitive, honourable German officer billeted in her mother-in-law’s house.  It is a ‘finely observed picture of how occupiers and occupied relate to each other’ (Peter Kemp, Sunday Times, March 5, 2006).  The Germans gradually become individuals to the villagers and the author invests the invaders with humanity.  Where Tempete en Juin is metropolitan, fast and furious, Dolce is provincial, brooding and melancholy.  In both it is the nuances of personal lives and fates, rather than war’s large-scale convulsions, that engage Nemirovsky, who wrote in her notebook: ‘historical, revolutionary facts must only be lightly touched upon, while daily life, the emotional life … must be described in detail.’  France’s defeat isn’t put into perspective by talk of the Battle of Waterloo, but by a scene where cakes are served on First Empire plates decorated with vignettes of Napoleon.  Dolce ends as the occupying troops leave for Moscow: ‘Soon the road was empty.  All that remained of the German regiment was a little cloud of dust.’

Suite.Francaise self-consciously alludes to War and Peace at certain points.  For example, as the Rostov family load their possessions into carts to flee the advancing French in 1812, so the grotesquely materialistic Pericands fill their car before quitting Paris.  Natasha Rostova is horrified by her family’s materialism, and shames them into emptying the carts and filling them with wounded soldiers; the Pericands delay because their monogrammed linen is not yet back from the laundry.

But, according to Denise Epstein, the Russian writer Irene Nemirovsky modelled herself on was Turgenev.  Like him, ‘she always wrote the most complete biographies and descriptions of characters, even if they were to appear in only two lines’ (The Guardian, 2006).  Helen Dunmore sees in her descriptions of the French rural landscape the ‘blend of realism and poetic tenderness that Turgenev perfected in Sketches from a Hunter’s Album’ (Zapiski Okhotnika, 1852).  She also recognises the influence of Chekhov in Nemirovsky’s use of details to fix a scene in the reader’s mind – for example, a ladybird on a girl’s arm; the bunch of cherries laid on the delirious Jean-Marie Michaud’s pillow by a farm girl.  Dunmore concludes that ‘Nemirovsky comes across as an intensely Russian writer, lyrical, forceful, earthy, idealistic and yet without illusions’ (The Guardian, March 4, 2006).

Nemirovsky shares many similarities with Vasily Grossman, another Jewish novelist born in the Ukraine.  Both wrote about the Second World War in unflinching detail.  Grossman’s Life and Fate (first published in 1980) has also been compared by critics to War and Peace.  In both cases their ‘lost’ masterpieces were discovered long after the authors were dead, causing controversy in their native countries by highlighting collaboration with the Nazis.  In France Suite Francaise sparked a national self-examination of the nation’s war record.  Nemirovsky’s portrait of French society in the tumult of war and occupation ‘is not judgmental, but it is devastating’ (Dunmore, 2006).  The author was a victim of French collaboration with the Nazis, but she died without knowing its full extent.

There are no Jewish characters in Suite Francaise, although many of Nemirovsky’s earlier novels deal with the question of Jewish identity.  David Golder (1929) is the story of a successful and ruthless financier who ultimately dies in great loneliness.  On publication it was lauded by reviewers in France and the United States and the following year became a feature film.  More recently, the novel has attracted criticism for its presentation of negative stereotypes: Golder’s nose is ‘enormous, hooked, like that of an old Jewish usurer’; Fischl, his rival, is “a fat little Jew … ignoble, somewhat sinister’ with ‘a murderer’s hands’ (Alan Astro: Two best-selling French Jewish women’s novels from 1929; Symposium; 1999).  It seems that Nemirovsky had an uncomfortable relationship with her own Jewish roots, but the extent of this de-Judaization can only be guessed from the fact that she converted to Catholicism in 1939.  In the circumstances, she may have been motivated by a wish to save the lives of her family.  On 27 July 1942, after she had been arrested, Irene’s husband, Michel Epstein, tried desperately to save her, writing to the German ambassador, Otto Abetz: ‘it seems to me both unjust and illogical that the Germans should imprison a woman who, despite being of Jewish descent, has no sympathy whatsoever – all her books prove this – either for Judaism or the Bolshevik regime’ (Appendix II of Suite Francaise, English edition, p.404)

In 2004 Suite Francaise became the first novel to be posthumously awarded the Prix Renaudot, the French literary prize awarded to the author of an outstanding original novel published during the previous year.  The original manuscript was donated to the Institut memoires de l’edition contemporaine (IMEC) in Paris.  Another unfinished novel, Chaleur de sang (Fire in the Blood, 2007), has also been transcribed and assembled from the manuscripts that Nemirovsky left behind, including two pages found in her suitcase.

There is a substantial biography in French: La vie d’Irene Nemirovsky : 1903-1942 (Grasset & Fasquelle, 2007) by Olivier Philipponnat and Patrick Lienhardt.  Irene Nemirovsky: Her Life and Works by Jonathan Weiss (Stanford University Press, 2007) was originally published in French as Irene Nemirovsky (editions du Felin, 2005).  The only other full-length work published about the author is Le Mirador (Presses de la Renaissance, 1992) by Nemirovsky’s youngest daughter, Elisabeth Gille, a biography in fictional form, written as ‘memoires reves’.