Dutch historian and author Rutger Bregman, ‘one of Europe’s most prominent young thinkers’ (TED Talks), has been much in the news recently. The thesis of his new book Humankind: a Hopeful History is that most people are fundamentally decent, a view that seemed to chime with the acts of kindness and co-operation inspired by the global coronavirus pandemic.

Bregman’s most startling example was his discovery of a real-life version of William Golding’s Lord of the Flies story, in which a group of schoolboys from Tonga were shipwrecked on a deserted island in 1965. Instead of running feral and turning on each the boys acted sensibly, immediately creating a set of rules to govern their conduct and to ensure co-operation. 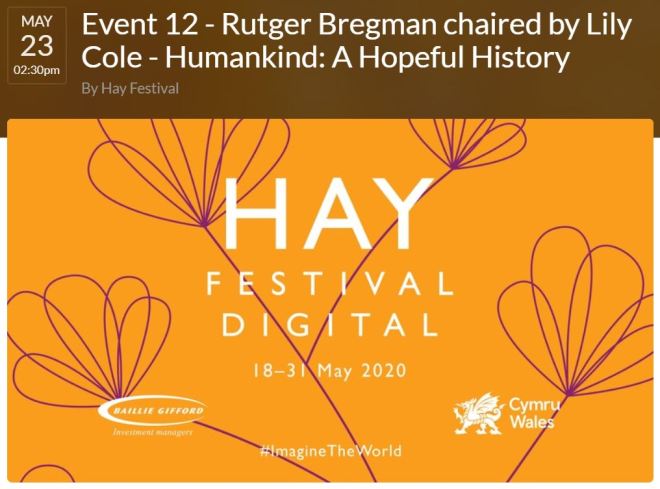 For the online Hay Festival Bregman was interviewed by Lily Cole, environmental activist, model, actress and author of Who Cares Wins: Reasons for Optimism in Our Changing World (out in July 2020).

Bregman lives in a small town south of Utrecht, a place he called “the bicycle capital of the world”. He said he was enjoying his virtual book tour because it meant he didn’t have to feel nauseous in planes and taxi cabs.

Asked whether there was an appetite for a more optimistic narrative in the present crisis, Bregman said “to me, the message of the book feels timely.” The first chapter deals with how people respond to crises. Evidence from 700 sociology case studies pointed to “an explosion of altruism.” Apart from hoarding toilet paper and other selfish behaviour the “vast majority of people have been co-operative.”

Was universal basic income now more possible? There was an opportunity for change, said Bregman. In the last decade ideas such as taxing the rich had become more acceptable: “cynicism is out and hope is in.”

Cole said there was a paradox between his message at the 2019 World Economic Forum in Davos (Bregman criticised the event for ignoring tax evasion) and his “slight critique of the state” at the start of Humankind. Surely if you raise taxes you have a bigger state? The author said his view of human nature was a bit like the anarchists, who believed that “most people were pretty decent … but power corrupts.”

It would take time to change the world, said Bregman. People in their early 30s (such as himself) were no longer traumatised by the Cold War. Cole picked up on his use of the phrase ‘everyday communism’ in his book – was this a bid to reclaim the c-word? “I’m teasing a bit,” he said, though communism was “basic sharing …we have this daily communism … without which the market and state couldn’t exist.”

“At the end of the book you encourage people not to read the news”, said Cole, going on to mention that the rights to the real Lord of the Flies story have now been bought and it will be made into a film.

Cole asked why salacious and dark news stories sell. Bregman replied that “we have a negativity bias that evil is stronger than good.” He confessed that if he read 100 positive comments about himself on Twitter he would disregard them; it was the 1 nasty comment that kept him awake at night. A negative world view was in the interests of those in power –  it sustained a hierarchy that wouldn’t be needed if people were basically decent.

The two went on to discuss the origins of inequality. Cole cited a study of a tribe which found that the desire for bigger huts gave birth to patriarchy. Bregman agreed that as hunter-gatherers in the Stone Age we were peaceful ‘proto-feminists’; there was a better work-life balance and little evidence of war. He used to believe in the march of progress but now thinks that “civilisation was a disaster.”

Something like the Commons was needed, a society where we could share democratically. Every innovation has come from the state, said Bregman – the iPhone was the result of public-funded research. It was important to understand where we are coming from so that we can design our institutions in a better way.

They talked about the nature of work in our present system, which Bregman said “produces dependency and depressed people.” There was evidence from Psychology studies that if you have high expectations of people they perform better and achieve more. If we wanted happy workers more “intrinsic motivation” was needed in a job; we needed to be doing something because we cared about it.

“It’s a fair criticism of my work that I focus too much on ideas,” said Bregman, but “ideas can change the world.” There were examples from history of unrealistic ideas becoming true: feminism started with a few ‘difficult’ women and has now reached the mainstream.

Bregman acknowledged that he had not written enough about domestic violence. He talked about how the classic household was similar to boarding schools (“total institutions”), where bullying was rife. There were the strong inequalities in both hierarchical structures and there was no way out. Non-boarding schools which have mixed age groups and academical levels “have almost no bullying.”

Lily Cole talked about the pressures of being forced to stay at home. She cited a study by Patricia Draper of two different communities in Africa, which looked at how setting impacts gender relationships. It found that as soon as private accommodation was introduced domestic violence increased; those communities with communal spaces fared better.

Cole finished by talking about the importance of play, how all creativity comes from it. Bregman linked this back to the importance of ‘intrinsic motivation’, how there is a “crisis of meaning” when people are stuck in a rut and they lose sight of what they should care about.

No time for a Q&A at the end, but there was a cascade of positive Comments from viewers. Maria Goulding wrote: “Ideas can change the world. Yes!” Paul Pender: “Excellent dialogue. More than just an interview”. Christine Weston: “A brilliant reminder of why the Hay Festival is so wonderful and necessary. The exchange and exposure to ideas feeds not only the mind but also the soul.”