Sicario — Mexican slang for ‘hitman’ — is an at times brutal edge-of-the-seat thriller, featuring an admirably low-key and sensitive performance by Emily Blunt, as well as outstanding photography, music and action sequences. But you leave the cinema depressed by its depiction of the USA’s real-life ‘war-on-drugs’ and its many casualties.

Blunt, of Looper and Into the Woods fame, plays Kate, a decent, by-the-book FBI SWAT officer fighting in the USA’s ‘war against drugs’, who finds herself ‘promoted’ to the next level when her superiors put together a team to track down Mexican drug cartel boss Manuel Diaz. She quickly discovers that her new colleagues play by different rules, operating in a murky world of shifting boundaries.

On this new battlefield, as the dead bodies pile up around her, Kate struggles to make sense of what her dodgy black-ops team are doing and why she is there with them. ‘Nothing will make sense to your American ears,’ she is told, ‘but in the end you will understand.’ 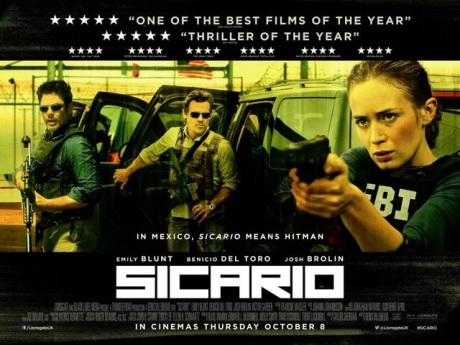 Kate has proved herself in an Arizona drug-bust which we see unfold at the start of the film in a bravura set-piece that had the audience jumping out of their seats. Rising French-Canadian indie director Denis Villeneuve’s opening is greatly enhanced by an ominous score composed by Johann Johannson. In a later scene his doom-laden slabs of distorted synth sound like foghorns from hell.

Kate is conspicuous as the only woman on the team. Unlike the others, she is not a veteran of the Afghan War, a gung-ho maverick like Matt (Josh Brolin) or an assassin and torturer like Alejandro (Benicio Del Toro). She kills people, but only in self-defence. Blunt’s face conveys Kate’s vulnerability and warmth: we are immediately on her side, seeing the unfolding horror through her eyes and registering the same feelings of wariness, bafflement, frustration, horror, and, by the end, a hollow-eyed despair.

The gloom is lifted by some exhilarating action, including a nail-biting shoot-out in a multi-lane traffic jam on the Mexican border. There is humour in the exchanges between Kate and her regular partner Reggie (Daniel Kaluuya), who teases her about her personal hygiene and wearing the same bra for a week.

But most of all it is the breathtaking camera work of veteran cinematographer Roger Deakins, veteran of Skyfall and Fargo, that elevates Sicario. The silhouettes of soldiers against a darkening sunset, or aerial shots of Mexican hills that look like iguana skins will linger in the memory.

But you leave the cinema feeling depressed because no amount of fine acting, photography and thrills can dispel the grim reality portrayed in Sicario. ‘Welcome to Juarez,’ says Kate’s escort as they drive past mutilated corpses hanging underneath a bridge like butcher carcasses.

Mexico is now ‘the land of wolves’. We are told that 20% of its inhabitants use hard drugs – a shocking statistic that makes an end to the cycle of violence look like a forlorn hope. And America’s questionable forays into Mexico to do battle with its drug cartels only make the situation worse, like poking a hornet nest.

As with many other wars being fought around the world, there will be no winners in this ‘war against drugs’, only death, misery and destruction. Despite its beautiful sunsets and cloudscapes, Sicario will not do the Mexican tourist industry any favours.