Mark Rylance’s giant-sized performance is the best thing about Steven Spielberg’s adaptation of Roald Dahl’s children’s story. His twinkly-eyed warmth and verbal mix-ups carry a film that has a touch of the Harry Potters in its sweetshop window CGI wonders, but ultimately lacks dramatic tension. 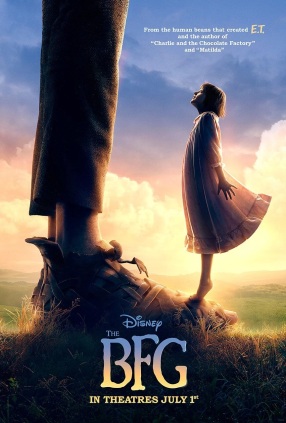 After bagging an Oscar for last year’s Bridge of Spies, Rylance’s collaboration with Spielberg continues to bear fruit. He plays the Big Friendly Giant as a kind, gentle and wise West Country yokel, who just happens to be 24 feet high, with elephantine ears that hear all the ‘secret whisperings of the world’. His huge face, with its conker-brown eyes and laughter lines, is up on the screen for most of the film’s running time, and because of Rylance’s genius at acting with his eyes, we never get bored of looking at it. Rylance inhabits The BFG’s CGI-enhanced world with effortless charm.

His relationship with 10 year old ‘human bean’ Sophie (Ruby Barnhill) is the core of the film: they are both lonely, and have never had a best friend before they meet each other. It is a sweet and funny friendship, but it lacks the kind of chemistry we might have expected if there was no CGI getting in the way. Sophie is a brave orphan, insomniac and bookish, but her past is a blank. The same goes for the BFG himself: we never learn why he is so much smaller than the other giants. Although the two leads have plenty of ‘mild peril’ to kick against, it all seems a bit too easy. As a result, The BFG feels overlong, sags in the middle and lacks real drama.

At the start of the film Sophie is still up at the ‘witching hour’, reading Nicholas Nickleby by torchlight in her orphanage dormitory, when the BFG comes calling. He plucks her out of bed and takes her back to his cave in Giant Country – somewhere north-west of the Orkneys. There, she learns that there are plenty of bigger, less friendly giants in existence, who will eat her up ‘in a dollop’. Fleshlumpeater, Bloodbottler, Childchewer and the rest bully the BFG; they call him a ‘runt’ and ‘an insult to giant people’.

Sophie eventually has an idea of how to put an end to the bullying, asking ‘Her Majester’ for help. The last section of the film features feasting and ‘whizz-popping’ at Buckingham Palace and is enormous fun. It’s not every day you see the Queen and her corgis farting so hard that they levitate.

Much merriment is also to be found in Roald Dahl’s linguistic invention and malapropisms: ‘I cannot be helping it if I be saying things a little bit squiggly,’ says the BFG, ‘I cannot be right all the time. Quite often I am left’.

The burnished copper glow of the film’s design – olde London town at night and the BFG’s cave, with its wonderland of luminous dreams in sweet jars – brings to mind the enchanting world of Harry Potter. Sophie and the BFG visit Dream Land, where he catches dreams in his net and bottles them, for distribution to the children of the world through his dream trumpet.  The dreams fly around like Tinker Bell fairies and this sequence, with its glowing leaf veins, was surely a Spielberg tribute to the Nutcracker suite in Disney’s Fantasia.