With its excellent cast, script and music, The Falling stays with you long after the final credits. This depiction of an intense teenage friendship and a fainting ‘craze’ at an all-girls school is by turns dreamy and unsettling, beautiful and disturbing, just like adolescence itself.

This debut feature film by British writer-director Carol Morley features a wonderfully natural performance from Maisie Williams (Game of Thrones) as Lydia, who loses her bearings when she loses her best friend. 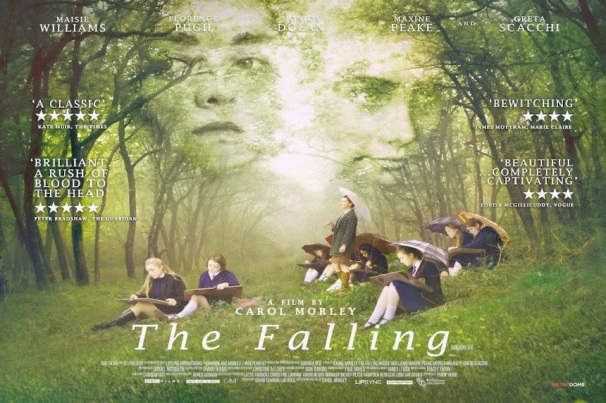 Set in 1969 in an English girls school The Falling opens with autumn colours, a beautiful oak tree by a pond, accompanied by pastoral folksong. Then we see close-ups of girl’s hair and a love-bite. Lydia worships the beautiful, cool and talented Abbie (newcomer Florence Pugh) and they are inseparable. Abbie is seemingly loved by everyone at except sour-faced Miss Mantel (Greta Scacchi), who tells her off for wearing a short skirt: ‘skirts no more than two inches from the ground when kneeling’.

Lydia and Abbie are like lovers; they carve their initials into the oak tree and share everything. Abbie is already sexually active and fears that she is pregnant. She vomits in class and has fainting fits, which become more frequent, until, after one of them, she dies.

Lydia doesn’t properly grieve for her friend; instead she inherits Abbie’s role as ‘leader’ of her classmates and assumes her mannerisms. Soon she is having fainting fits too, and gradually many of the school’s pupils follow suit, as well as one of its teachers. At assembly when a speaker from the Women’s Circle talks about Accidents in the Home, the pupils start dropping like flies.

Is this a medical phenomenon called ‘mass psychogenic illness’ or, as a psychiatrist reports, ‘hysterical contagion’? Or are Lydia and her friends faking it? Perhaps something more dark and mysterious is at work here. Lydia’s older brother wears a pentangle badge and dabbles in the occult; he tells her that leylines run underneath the school. The full moon, menstrual cycles and the oak tree, with its connections to pagan ritual, all feature prominently.

Writer-director Carol Morley has made a virtue of the film’s shoestring budget (£750,000 from the BFI) by creating a claustrophobic, insular world with only three locations: school, home and pond/oak tree. From a clever use of close-ups, she manages to conjure up an eerie atmosphere and create something special.

Morley pays knowing homage to another girls’ school mystery, Picnic at Hanging Rock (1975), substituting English rain and umbrellas for Australian sun and parasols. Tracey Thorn’s ‘spooky folk’ songs also bring to mind The Wicker Man (1973), with its sensual, slightly sickly ambiance. Evocative use is made of the school’s Alternative School Orchestra, with its ringing triangles and ‘shiver down the spine’ xylophone glissandos. To further unsettle the audience, Morley occasionally jolts us with fast-cut ‘flashbacks’, a technical version of old-fashioned horror ‘jumps’.

But this is not a tricksy film; it is an organic one in which script and acting work seamlessly together. Apart from the ending, which felt a bit rushed, there is an unhurried dreaminess to the film’s school life. Teachers smoke in the classroom and the pupils read Wordsworth. Even the fainting is more like ‘swooning’. There is a lovely scene between the headmistress (Monica Dolan) and Miss Mantel, when the former says ‘if they had any idea what it’s like to be a middle-aged woman, they’d know what misunderstood meant,’ and they get the giggles for real.

The Falling is such a vivid recreation of passionate school friendships and ‘crazes’ that it makes us think about our own school days. Looking back, we did some weird stuff to each other. Fainting doesn’t seem so far-fetched after all.