The Lady in the Van is a treat which will have fans of Maggie Smith and Alan Bennett laughing their socks off. The script, based on Bennett’s real-life relationship with his eccentric ‘tenant’, is a delight and the collaboration between these two national treasures is a marriage made in comedy heaven. 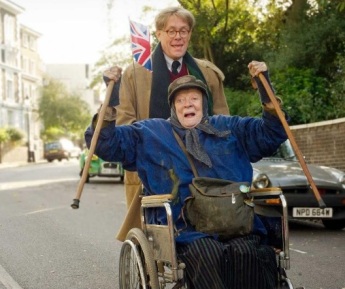 With her layers of old coats, headscarf and Rambo cap, Maggie Smith is a magnificent ‘bag lady’, cantankerous and doolally, but also strangely heroic, capable of a ‘vagabond nobility’. Miss Shepherd’s bulging trout-like eyes survey the world with an eye on the main chance, her strident voice never far away from an indignant shriek. Smith plays her like Margaret Thatcher doing Lady Bracknell, always on the verge of ‘a handbag’. In one scene Miss Shepherd watches Thatcher on the news through Currys’ shop window and we are encouraged to titter at the sartorial similarities between the two women.

Alex Jennings is also superb, playing two Alan Bennetts: the writer and the person who deals with life’s practicalities. The two Bennetts appear on screen together, wearing the same clothes and different expressions, arguing over what Alan should do about the lady in the van.

Based on his stage play of the same name, also starring Smith and directed by Nicholas Hytner, The Lady in the Van is the ‘mostly true story’ of how Miss Shepherd parked her Bedford van in Alan Bennett’s front garden in Camden Town in the 1970s and ended up staying for fifteen years. Their strained relationship dominates the film and gets the biggest laughs. ‘Where is it?’ shrieks Miss Shepherd, after asking to use the fastidious Bennett’s lavatory.

There’s no escaping the toilet humour and stink. The film starts with the writer describing the ‘multi-flavoured aroma’ of Miss Sheppard and her van – ‘the prevalent odour suggesting the inside of someone’s ear’ – and he later worries that his writing on the subject is ‘too much about shit’ before deciding that ‘shit was at the forefront. Caring is about shit.’ Bennett’s mother, ‘on a state visit,’ gets a whiff of the lady – ‘a right nasty bad dishcloth smell’, and she presses her son on toilet arrangements. ‘Something to do with plastic bags,’ says Bennett. ‘Stout ones, I hope,’ replies Mam. The van is surrounded by a moat of them.

Bennett also worries that his writing ‘niche’ is old ladies, and that his life is tame and dull, in contrast to the colourful Miss Shepherd, who, we learn, drove an ambulance during World War Two, was a virtuoso pianist in Paris and was twice a nun. It was the nuns who forbade her to play the ‘ungodly’ piano, an act that perhaps pushed her over the edge. Bennett visits his local convent in an attempt to get help with shopping for Miss Shepherd. ‘We don’t have shopping nuns,’ says an official dismissively.

The action of The Lady in the Van happens mostly in Gloucester Crescent, Camden, but we get outings to Broadstairs and occasional flights of fancy to increase its widescreen appeal. Any dramatic tension derives mostly from Miss Shepherd’s past: why is she afraid of the police? And who is the sinister figure with the creepy comb-over (Jim Broadbent) who occasionally menaces her at night?

With cameos from Bennett’s History Boys (James Corden, Dominic Cooper, Russell Tovey) and excellent support from Roger Allam and Frances de la Tour, The Lady in the Van is a comic triumph which bears comparison with Withnail and I, another British classic set in Camden that features a larger-than-life character.