The Shape of Water is a widescreen treat, a satisfyingly rich and moving fairy tale fantasy that also works as spy thriller, love story or romantic comedy. Guillermo del Toro’s tale of a fish-man creature and the mute cleaner who befriends it features wonderful acting, terrific dialogue and a gorgeous design.

The film is set in 1962 Baltimore, but real world troubles do not often impinge. We glimpse footage from the Vietnam War and race riots on television sets, but the characters switch channels to old musicals. Both Elisa (Sally Hawkins) and her best friend neighbour Giles (Richard Jenkins) live in apartments above a cinema and both are old-fashioned romantics. When Elisa is first shown leaving home, a building is on fire at the end of her block, but she doesn’t even seem to notice. 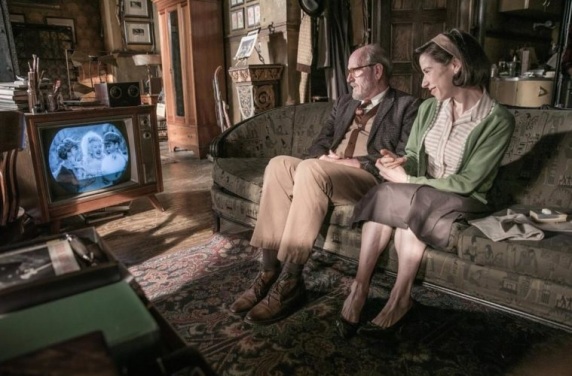 The Shape of Water is framed by an unknown narrator who tells us what to expect: ‘a tale of love and loss’ about a ‘princess without a voice’ and the ‘monster who tried to destroy it all.’ It has echoes of Beauty and the Beast or Free Willy, with the quirky charm of a Jean-Pierre Jeunet film and a menacing baddie straight from Coen Brothers Scary Monsters casting.

Elisa works as a cleaner at the Occam Aerospace Research Centre, where she uses sign language (we get subtitles) to communicate with her chatty co-worker Zelda (Octavia Spencer). When the facility takes delivery of a strange fish-man creature, caught in the Amazon, the white-coated scientists and their military bosses talk about using it to get ahead of the Soviets in the Space Race. Sadistic Colonel Strickland (Michael Shannon) wants to dissect it and a Russian spy is under orders to kill it (‘we want the Americans not to learn’).

Elisa, though, is strangely drawn to the fish-man. She engineers time alone with it and gradually falls in love. The feeling seems to be mutual. As dark forces conspire against the creature, Elisa must somehow rescue it, with the help of her friends. Her impassioned signing to Giles gets to the heart of what the film is about – the way we treat ‘otherness’. When he objects that ‘this thing isn’t even human’, Elisa signs in reply ‘and if we do nothing, neither are we.’

As ever, Sally Hawkins is excellent as Elisa, using her soulful eyes and expressive face to convey defiance and love. Here, she adds unselfconscious nude scenes to her repertoire, and does a nice line in synchronised seated tap dancing. She is fast becoming a national treasure.

Superb support is provided by craggy veteran Jenkins, who adds witty, wistful gravitas and wisecracking Spencer, who gets the best one-liners, usually belittling her husband (sample: ‘it takes a lot of lies to keep a marriage going’). Michael Shannon (Mud, Midnight Special) makes the most of his ‘monster’ role, by turns chilling and ridiculous. After inflicting a nasty bit of torture he is fond of reading ‘The Power of Positive Thinking’.

The Shape of Water is ravishing to look at, with teal green its dominant colour – cadillacs, chairs, lockers, baths and fish-man tanks are all a slightly queasy aquatic green, as if writer-director del Toro is saturating us. There is a lovely scene in which a post-coital Elisa watches the rain through a bus window, seeing two raindrops chase each other, before they join together as one.