If, like me, you knew nothing much about Aussie folk hero Ned Kelly before watching this film – apart from the fact that Mick Jagger portrayed him in a 1970s biopic with a dodgy Irish accent – True History of the Kelly Gang will leave you confused and unenlightened.

What was it about this criminal outlaw that captured the Australian public’s imagination? Was he a kind of Robin Hood figure, robbing from the rich and giving to the poor? If so, Justin Kurtzel’s adaptation of Peter Carey’s eponymous Booker Prize-winning novel doesn’t show us any heroic wealth distribution. Instead we see a brutalised boy grow up to be a crazy criminal who is fond of wearing homemade armour and women’s dresses.

‘Nothing you’re about to see is true,’ warns the film’s narrator from the outset. If Carey’s version was ‘loosely based’ on Ned Kelly’s life, then Kurtzel’s film, which takes its own imaginative detours from the book (most colourfully, the suggestion that Kelly was, perhaps, a gay transvestite) means we are at least two removes from historical accuracy.

Does this matter? Only if the result is a confusing mess. True History of the Kelly Gang strives for artistic coherence but is only partially successful. The film is gritty, powerful, sometimes gruelling and mostly entertaining. It features a cathartic and committed performance from George MacKay (Pride, 1917) and concludes with a memorable shoot-out that recalls the Coen Brothers’ Blood Simple. But it doesn’t quite hang together as a biopic or a character study.

In 1867 mullet-haired 12 year old Ned (Orlando Schwerdt) lives ‘amongst dirt and disappointment’ in a corrugated shack in the Australian outback. The blasted landscape of burnt-matchstick trees looks like the No Man’s Land in MacKay’s previous film, 1917. We first see him peering through a window as his prostitute mother (Essie Davis) has sex with a customer.

Ned likes the quiet of nature but he is also capable of killing a neighbour’s cow and cutting its leg off for his family’s supper. A sensitive butcher, he is responsible for his father getting jailed, then killed. Any act of goodness, such as rescuing a boy from drowning, goes unrewarded – his mother refuses to let him play with the boy because he comes from a rich family.

After bushranger Harry Power (Russell Crowe) calls round and entertains Ned’s family with a rude singalong to ‘Constable Kuntz,’ Ned is given the opportunity to escape his ‘mongrel life’. It later transpires that his mother Ellen has, in fact, sold him to Power for £15. The life of a bushranger seems to mostly involve murdering people, especially Constables. Ned is traumatised and wants to go home, but Power insists that he will make him into a hero. ‘Don’t be a coward like your father,’ he warns Ned.

Ellen is ashamed that her husband liked wearing one of her red dresses, and this unmanly tendency seems to have been inherited by both Ned and his brother Dan. Despite getting married, Ned’s most intimate relationship is shown to be that with his best friend, Gang member Joe (Sean Keenan).  Was Ned Kelly gay? Shaun Grant’s screenplay suggests he might have been, but Ned’s behaviour is seen as part of the freedom and self-realisation enjoyed by the outlaws – what could be more fun that riding around with your mates at night, wearing dresses and raising hell? 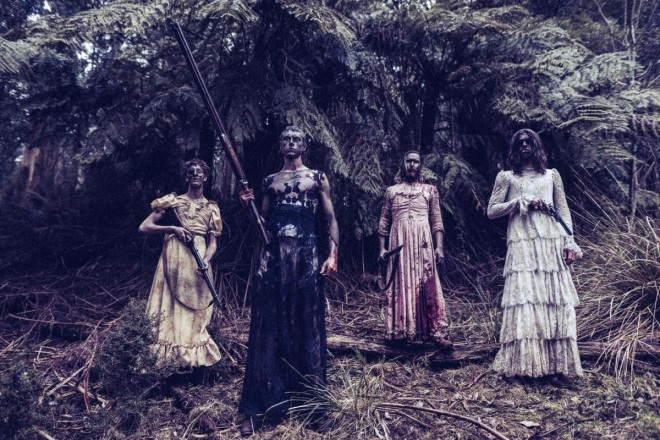 At least Ned and his gang weren’t wearing white gowns and pointy hats with eye-holes.