In this fascinating biopic of blacklisted screenwriter Walton Trumbo, Oscar-nominated Bryan Cranston enjoys his best role since Breaking Bad, with fine support from a cast portraying colourful film industry figures. Trumbo paints a richly detailed, amusing and alarming portrait of Hollywood during the communist witch-hunts of the 1940s/50s.

As a member of the American Communist Party Trumbo was one of the blacklisted ‘Hollywood Ten’, a group of directors and screenwriters imprisoned for ‘contempt of Congress’ in 1950 because they refused to admit their political beliefs or name names of other ‘dangerous radicals’ when summoned to testify by the House Un-American Activities Committee (HUAC). 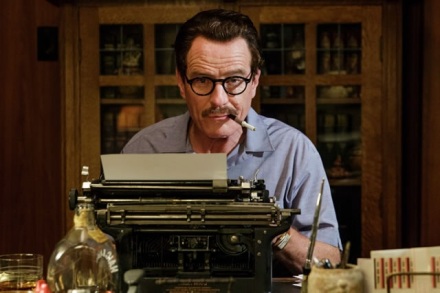 As the film begins Trumbo and his friends are seen by many as traitors. They lock horns with the ‘Nazi’ Motion Picture Alliance, led by John Wayne (David James Elliott) and the poisonously influential Hollywood gossip columnist Hedda Hopper (Helen Mirren, chillingly good). The witty wordsmith gets the better of a gung-ho Wayne (‘where did you serve? On a film set, shooting blanks’) but he is soon counting the cost of standing up for the freedom of expression.

With the US in the grip of Cold War paranoia and fear of the Red Menace, Trumbo’s fall from grace is swift: he goes from being the highest paid writer in Hollywood (‘the swimming pool socialist’) to moonlighting as a B-movie hack, churning out scripts under assumed names. When he does manage to fit in some serious work, his screenplays for Roman Holiday (original title: The Princess and the Peasant) and The Brave One triumph at the Oscars, but Trumbo is unable to claim authorship until years later.

Cranston’s warts-and-all portrayal of Trumbo reveals a human being rather than a martyr, a brave, clever and generous man, but also a stubborn, workaholic and selfish one. His crusade puts his own family at risk and his work always comes first: Trumbo misses his daughter’s 16th birthday party because he is too busy clacking away at his typewriter in his bathtub, cigarettes and booze on the go.

Director Jay Roach, best known for Meet the Parents and Austin Powers, ensures that Trumbo doesn’t flag, like its Benzedrine-popping subject; he is greatly helped by John McNamara’s witty, energetic script, based on the 1977 biography by Bruce Alexander Cook.

As time passes, from 1947 to 1961 (when President Kennedy defied a boycott of Spartacus, effectively ending the blacklist) Trumbo’s moustache grows more flamboyant and his typewriter model changes to a sleek IBM.

Were the movies really ‘infested with hidden traitors’ as one character claims in the film? After the blacklist is defeated, Dalton Trumbo tells us what a waste of time, money and lives the whole sorry business was. He later goes on to say: ‘The blacklist was a time of evil and no-one who came through it was untouched by evil’ There were ‘no heroes or villains. Only victims.’