If Mike Leigh decided to make a coming-of-age film about a gifted teenager on the autistic spectrum, it would probably be something like X+Y: humane, funny, down-to-earth and tinged with darkness. The film features superb performances from the leads, including Leigh veterans Sally Hawkins and Eddie Marsan.

X+Y is the first feature film by Morgan Matthews, inspired by his 2007 documentary Beautiful Young Minds, which followed the British team competing in the International Mathematics Olympiad. The character of Nathan is based on participant Daniel Lightwing.

Nathan is on the autistic spectrum; aged 9 he finds ‘any communication of the non-mathematical sort very difficult’ and is aware that he sees the world in a different way to other people. He is close to his dad, who tells him he’s got special powers, like a wizard (‘and we’re all Muggles’). Early in the film Nathan experiences the trauma of watching his dad die in a car crash. At the funeral he refuses to hold his mum’s hand. 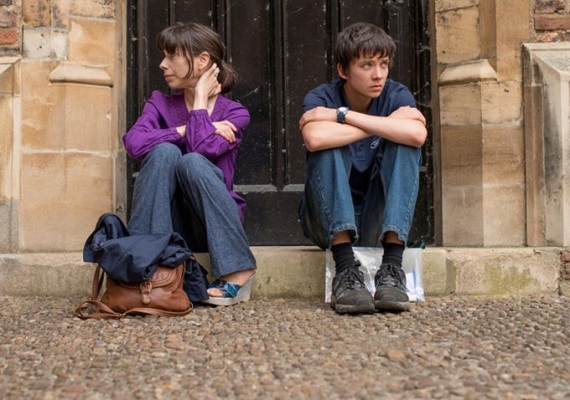 Nathan has a difficult relationship with his frazzled mum, Julie (Sally Hawkins), who struggles to cope with his coldness and odd demands. His Chinese takeaway order has to be a prime number and there have to be a prime number of prawn balls. When his mum gets the order wrong, he gets upset, telling her: ‘you don’t get anything right’.

Because of Nathan’s advanced interest in numbers, he is put in touch with Mr. Humphries (the brilliant Rafe Spall), who becomes a surrogate father-figure and maths mentor. Mr. H. suffers from MS and also has his own demons, having ‘failed’ when he competed in the Maths Olympiad himself. It has all been downhill since then.

But as X+Y shows, success can be measured in different ways: there is no formula for love. Like Julie, we fall for Mr. H – Spall makes him into a wonderful, flawed human being – and it is a real pleasure to spend time in his company.

Under Mr Humphries’ guidance, Nathan becomes a contender for the Olympic Maths team, and flies out to Taiwan for a Maths Camp with his fellow teenage geniuses. Here, he gets paired up with a ‘Chinese buddy’, Zhang Mei (Jo Yang), and an awkward, sweet romance follows when they return to England for the Olympiad at Trinity College, Cambridge. 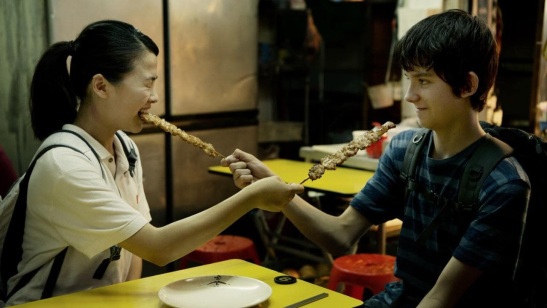 As 16 year old Nathan, Asa Butterfield (Hugo, Ender’s Game) is completely believable, bringing a natural teenage awkwardness and coolness to his ‘otherness’. When he goes walkabout in Taiwan, soaking up the alien culture, he is like an alien himself: tiny facial tics and head movements trying to assimilate all the new data.

Will Nathan triumph? Despite its title, X+Y is no formulaic feelgood movie. The dark, obsessional side of being a gifted teenager is shown by another autistic character, Luke (Jake Davies), who cuts himself and tells Nathan that ‘it’s all right being weird, as long as you’re gifted. I don’t even enjoy it, maths. Isn’t that stupid. What’s the point?’

However, the tone of the film remains upbeat and the acting is so good that telegraphed jokes pack a charming punch. ‘How do you do?’ says a well-spoken maths whizzkid when he meets Nathan for the first time. ‘How do I do what?’ asks a puzzled Nathan.

When Mr Humphries starts tutoring Julie in maths, he asks ‘Can you say that word?’

In real life, Daniel Lightwing went on to win the silver medal in the Maths Olympiad. He also got a double first from Cambridge, worked for Google as a programmer, and got married to the girl that he met in China. Now that’s a happy ending.